I got to admit I found <I Became The Male Lead’s Adopter Daughter> (IBTMLAD) Manhwa through a recommendation. When I read a Manhwa, I look for some elements that fit my preference. If it doesn’t tick majority of the check boxes, I would just drop the Manhwa altogether. Once I started reading IBTMLAD I was looking for the main characters and see what the plot is all about. Guess what? It did not start the way I expected it to.

<I Became The Male Lead’s Adopter Daughter> opens with Duke Phileo Boleoti looking for a child to adopt. I kinda knew he was probably the Male Lead though still unsure. So at this point I was thinking, if he is the ML, then where is our MC? Almost all Manhwa I have read started with the MC’s perspective or backstory. As the chapter went on, I was shown more and more of Duke Boleoti’s point of view. I was genuinely confused and started thinking maybe Duke Boleoti was actually the MC and this Manhwa was not a romance genre. Nearing the end of the chapter, finally, the MC came into view. But I was more confused since the MC is just a child. It doesn’t make sense that a child MC is paired with an adult ML. But the Manhwa title suggests otherwise. What is going on??

Now, the Manhwa title <I Became The Male Lead’s Adopter Daughter> implied a lot of things to me. It implied that the MC got adopted by the ML. Age is unspecified and some stories have nobles adopt older children. The terms “Male Lead” also infer that this is an Isekai Manhwa with the MC aware that she got reincarnated or transmigrated into the world of a story or game. However, the MC is too young to be paired with this ML.

At this point, I have no idea where the story is going and what it is all about. Which is good because most of the time this type of genre starts and proceeds in the same way just with a different flavor.

Believe me when I said a few chapters in, I started thinking that since Duke Boleoti is the ML and Leonia is not the Female Lead, then maybe Leonia is not the MC and the story is not actually about her. There were some hints given to point to the fact that Leonia is possibly a reincarnated character. She’s bold, doesn’t behave like a child and uses some words that is suspiciously not compatible with the time period this story is set in (but no one points this oddities out). So nothing is concrete to prove this theory.

It was only until after chapter 11 that we were briefly shown that Leonia was indeed an adult female Korean in her past life. Okay, now this is my cup of tea. So, Leonia is confirmed to be the MC even though the story never pivots to her perspective or monologue up to this point. What an awesome way to subvert my expectation.

I will only focus on the protagonists because the manhwa is still early and ongoing. There are still many characters yet to show up, including the female lead and main villain. 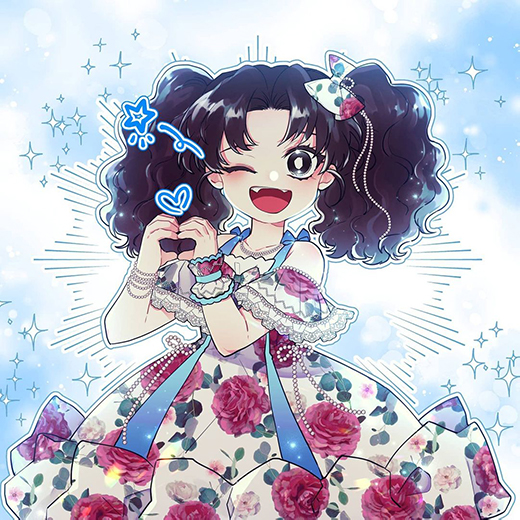 Our cute, funny and loveable MC. Obsessed with muscles. She is one of the rare actually strong female characters. Tough mentally and have an ability called Beast Fang similar to the Duke that can even make knights fall on their knees.

It is revealed later on that she was originally an adult lady from Korea that got reincarnated into this novel world. However, information about this is still sparse and vague because her knowledge of her previous life plays very little in her current life except for a few specific instances.

Behind his cold exterior that everyone else sees, he is very loving and caring towards Leonia. He is brilliant as a Duke and very strong as a swordman. One of the four people in the entire empire (not counting Leonia) to have a mysterious power called Beast Fang.

He later found out that Leonia is the child of Regina, his older cousin that ran away from home for the sake of love. 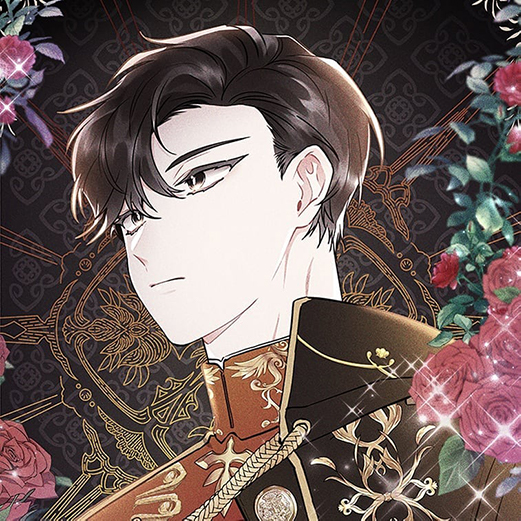 I love Leonia’s personality. Her being sooo cute is also a plus. She’s bubbly and cheerful despite the abuse she had to endure at the orphanage. The way she doesn’t take crap is so badass. When all the caretakers that abused the children were apprehended and brought to the mansion, we get to see something pretty rare. Leonia exposed their wrongdoings in front of everyone while saying she will not forgive them. She confronted those abuser and totally ruined them accompanied by the applause of the servants in the mansion. Most Manhwa or novel with children, we get to see that the children (even reincarnated ones) are not this strong. Any abuse they get would deeply scar them mentally. I have read this too many times. Even given the chance to get revenge, they do not properly execute them. Basically allowing the villains to plot against them in the future.

Duke Boleoti (Phileo) personality is also a breath of fresh air. He shows his love for Leonia and properly takes care of Leonia. Since he is normally stoic and expressionless, this public display of affection baffles everyone that knows the Duke, including the servants. There is no secret between him and Leonia. No misunderstanding or miscommunication. Their relationship is shown to be strong and unbreakable from the very beginning. I can see a healthy father daughter relationship going for them far until the future. 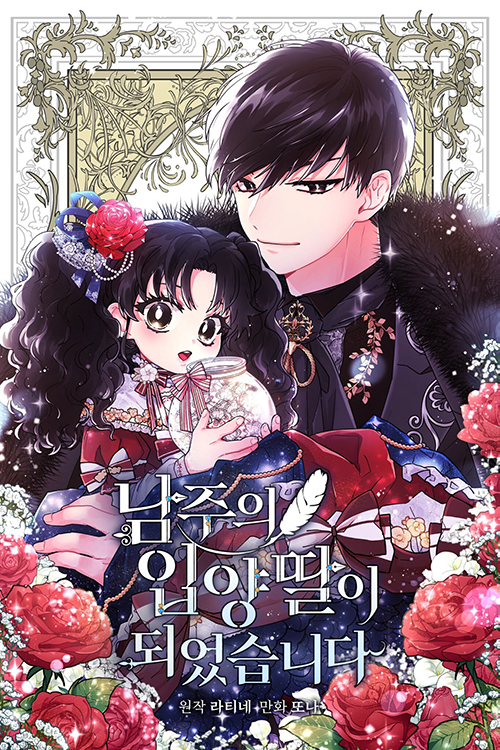 Only cover art I could find for the Manhwa. The rest is cover art for the novel. 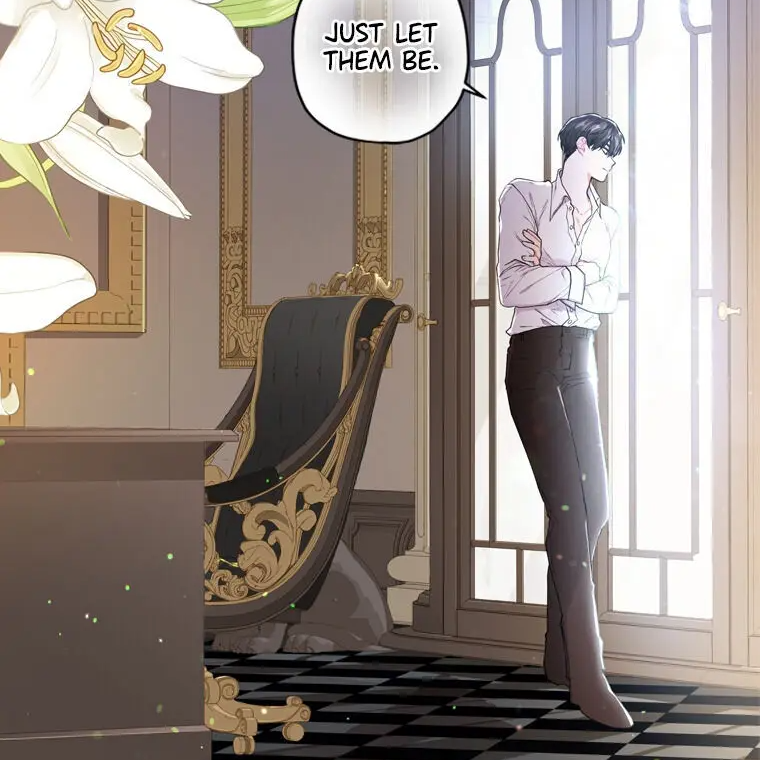 Look at the intricate drawing of the background. 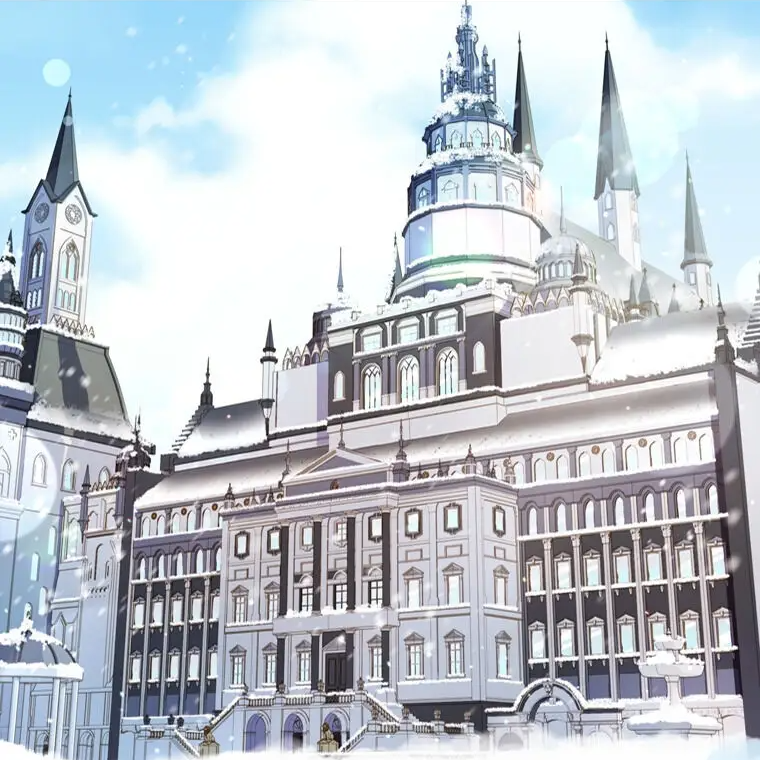 Crazy details on for the Duke’s mansion. 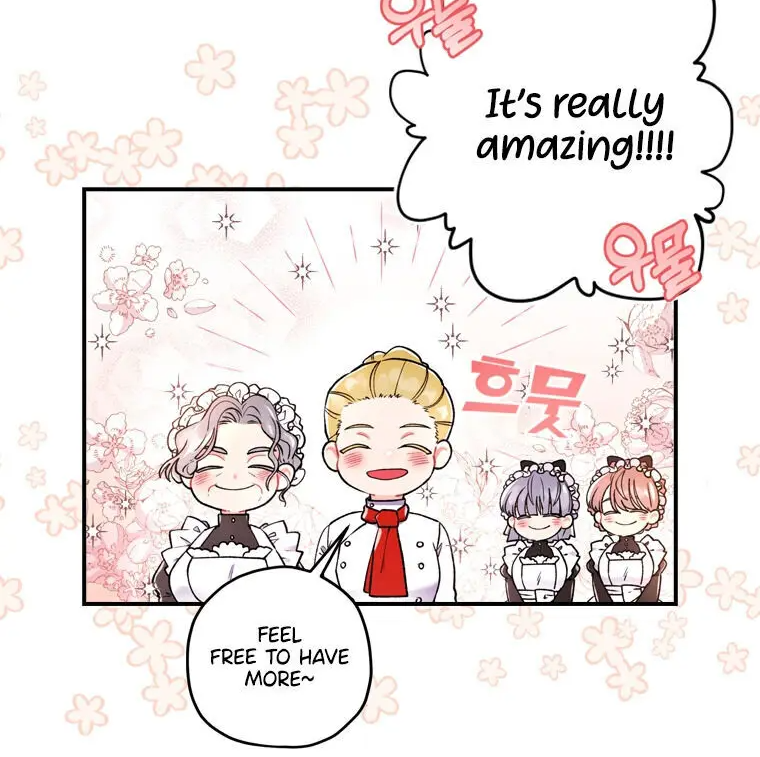 There are cute chibi artwork too. 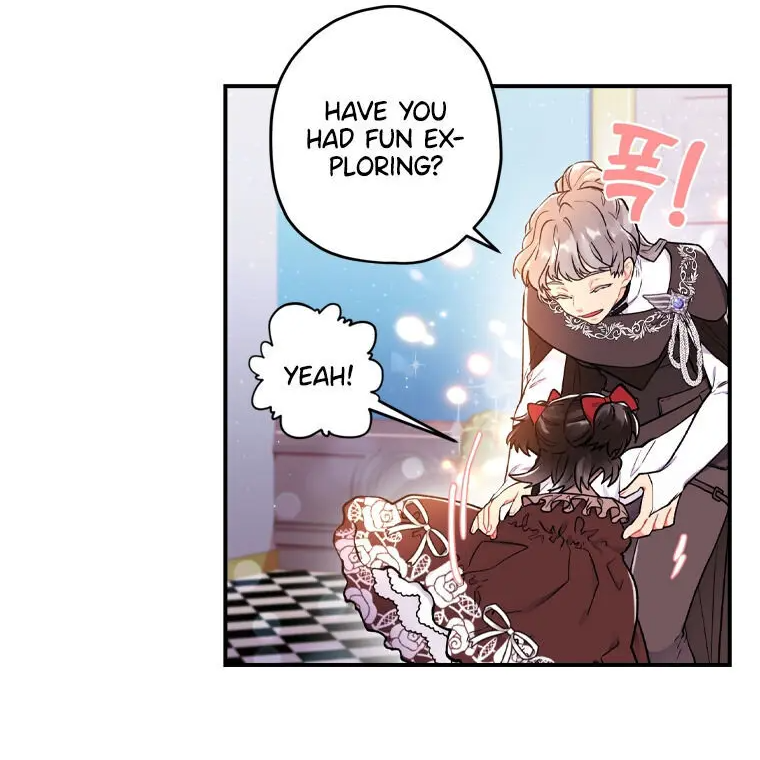 Look at the flow of movement. Intricate design of the dress and outfit. Background is not neglected too. 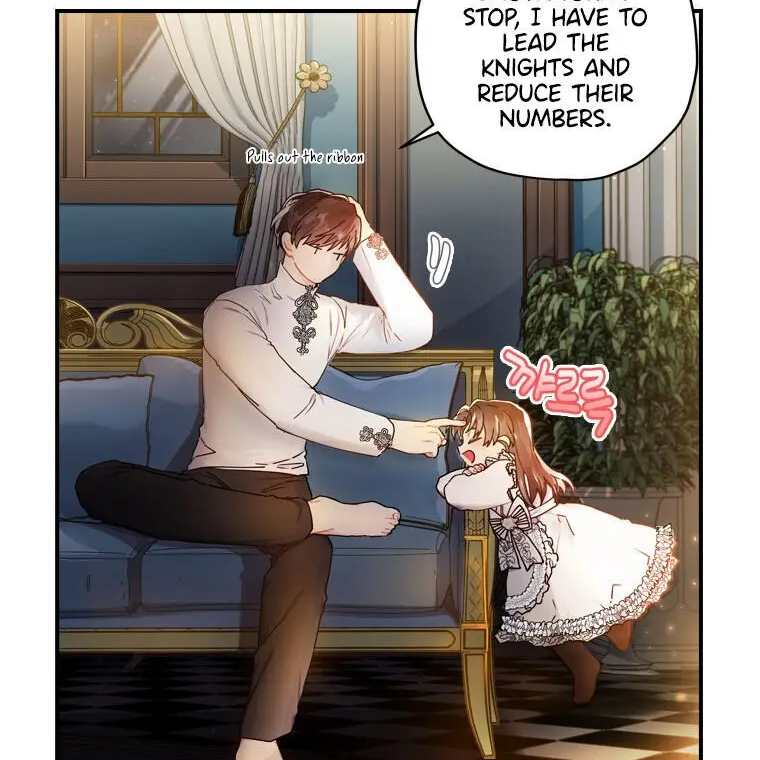 Some scene of bonding. Expect a lot of these. 🥰 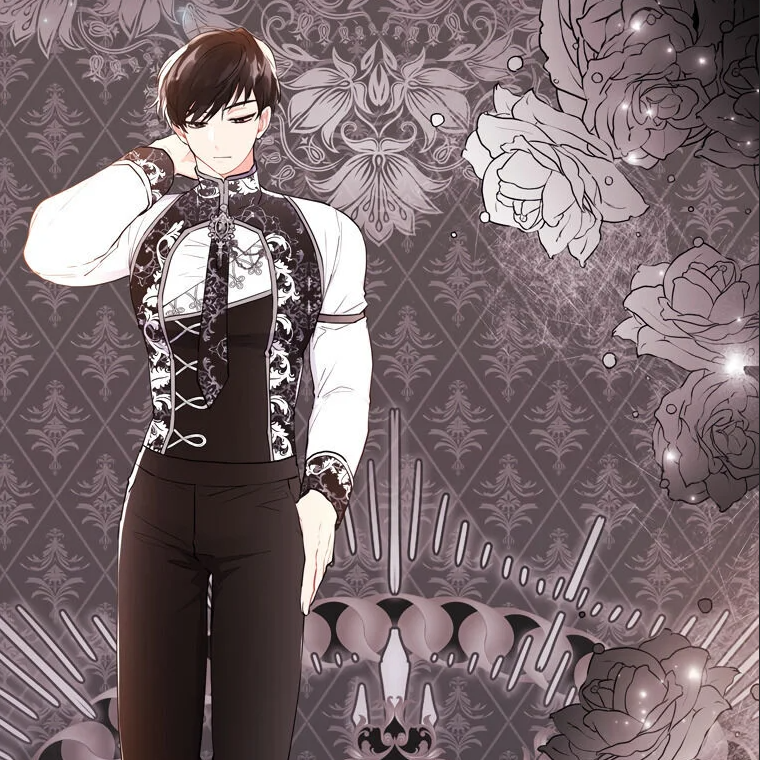 The Duke has a pretty toned body… 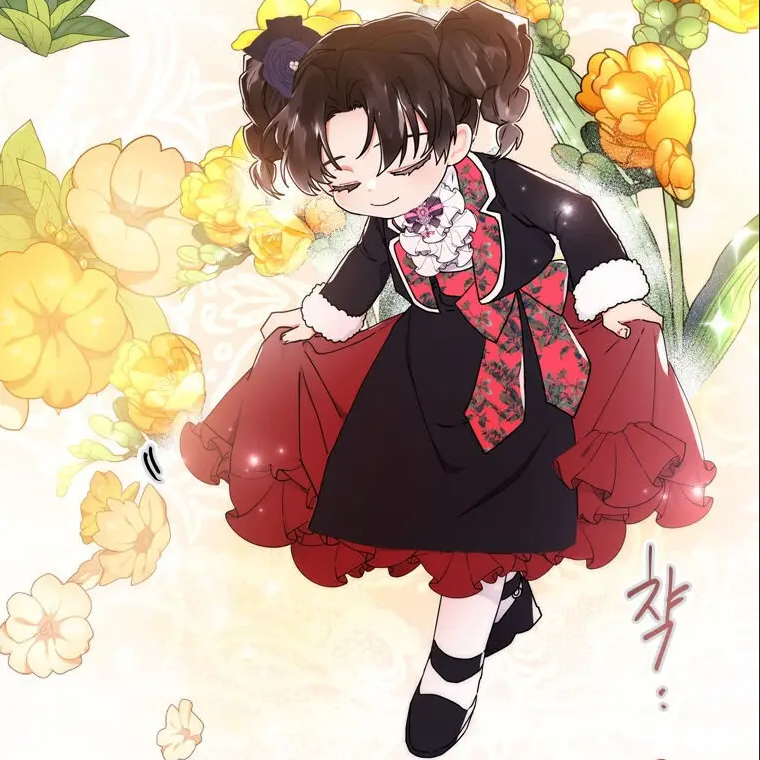 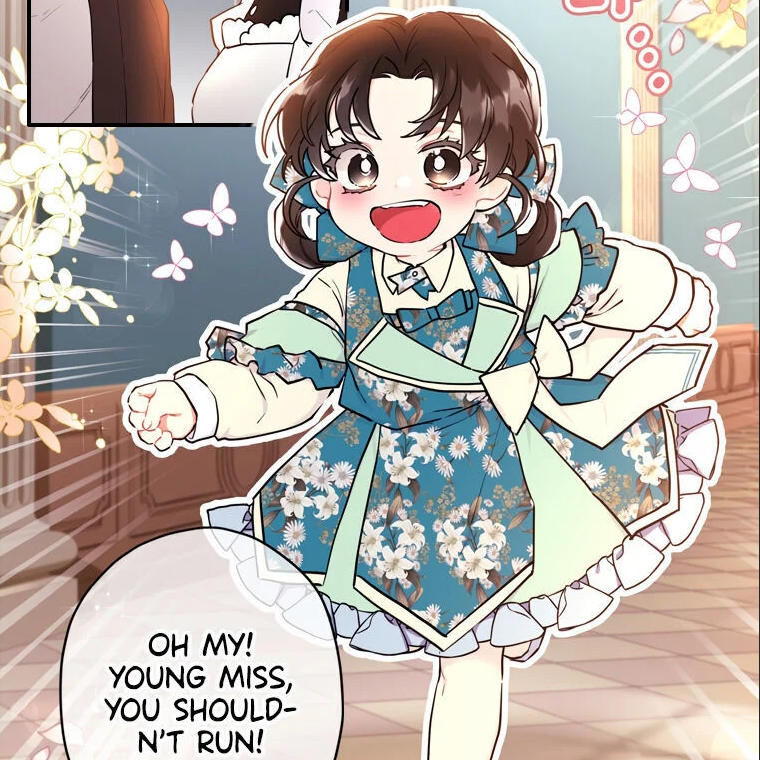 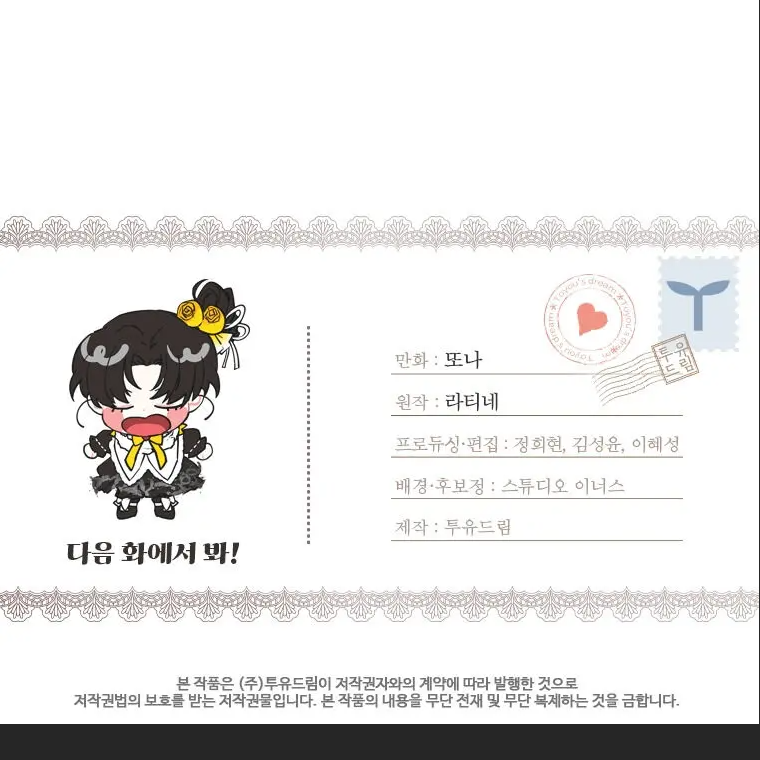 Each chapter ends with this postcard artwork with chibi Leonia. No clue what it says though. No translation.

The art style is very detailed and well drawn. The characters are drawn beautifully. The artist is really skilled at drawing the characters at multiple angles. Every scene with the characters have different perspective with minimal dialog bubble interuption.

Even when the Leonia and the Duke talking with each other, the artist draws them doing some action and not just draw them just standing/sitting there. Movements are also properly communicated through the drawing.

Take a look at some scenes in the Manhwa. It is some of the best work I have ever seen. There are rarely empty panels with just the character’s portrait. Each panel always have some sort of background.

I tried to find other work of the artist but it seems to be this is their first / only commercial work. Do let me know in the comments if you can find his other works if it does exists. I’m really interested to check it out.

The story and dialog flows nicely and easily followed so you won’t get lost while reading and trying to understand the story.

The Manhwa is release once a week and the scanlation team translated pretty much almost immediately.

I don’t foresee the translation stopping anytime soon as there is no indication of any problems.

IBTMLAD Manhwa seems to follow its novel counterpart pretty closely. So I’m guessing that the plot is going to be the same as the novel. It may diverge somewhere down the line, but who knows at this point since it’s still early. My spoilers for IBTMLAD can be found here, but it is strictly limited to the Manhwa version because I have to assume that there is a possibility that the story may diverge from the source material. However, if you are interested in the spoilers for the novel version, you can click here. The translation is already further than the Manhwa by a significant margin at the time of this writing.

This is a must read if you are a fan of this type of story. If you can’t wait for the release each week, I suggest you read the novel too. Excellent writing and good translations so you won’t have much issue.

Alternatively you can read my spoilers of IBTMLAD novel here if you can’t wait. The novel is further in the story than the latest chapter of the Manhwa.

Summary This is one of my favorite manhwa of all time. The story is compelling, and the art style is very detailed and beautiful. I can't wait to read the next chapter every week. You should give this manhwa a read. 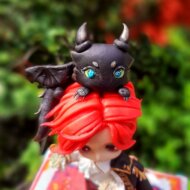 Passionate patron of manga, manhwa, manhwa, light novel and web novel for over 15 years and counting.

We use cookies on our website to give you the most relevant experience by remembering your preferences and repeat visits. By clicking “Accept”, you consent to the use of ALL the cookies.
.
Cookie SettingsAccept
Manage consent

This website uses cookies to improve your experience while you navigate through the website. Out of these, the cookies that are categorized as necessary are stored on your browser as they are essential for the working of basic functionalities of the website. We also use third-party cookies that help us analyze and understand how you use this website. These cookies will be stored in your browser only with your consent. You also have the option to opt-out of these cookies. But opting out of some of these cookies may affect your browsing experience (e.g: Images not showing up).
Necessary Always Enabled
Necessary cookies are absolutely essential for the website to function properly. These cookies ensure basic functionalities and security features of the website, anonymously.
Functional
Functional cookies help to perform certain functionalities like sharing the content of the website on social media platforms, collect feedbacks, and other third-party features.
Performance
Performance cookies are used to understand and analyze the key performance indexes of the website which helps in delivering a better user experience for the visitors.
Analytics
Analytical cookies are used to understand how visitors interact with the website. These cookies help provide information on metrics the number of visitors, bounce rate, traffic source, etc.
Advertisement
Advertisement cookies are used to provide visitors with relevant ads and marketing campaigns. These cookies track visitors across websites and collect information to provide customized ads.
Others
Other uncategorized cookies are those that are being analyzed and have not been classified into a category as yet.
SAVE & ACCEPT
ManhwaManhwa ReviewI Became the Male Lead’s Adopted Daughter